A Parish In Three Counties

The older residents of the villages of Eaton Socon and Eaton Ford can truly say that they have lived in three counties and yet have not needed to move from their homes. Meanwhile those residents who have lived in the smaller hamlets within Eaton Socon parish have never changed counties. How? 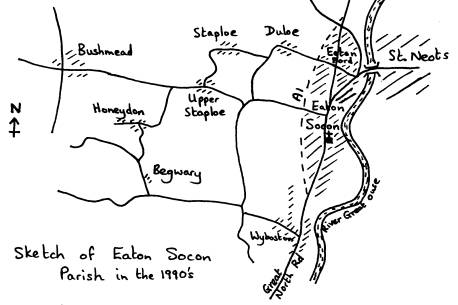 Nineteenth and twentieth century Directories of Bedfordshire state that ‘Eaton Socon is an extensive parish on the borders of Huntingdonshire’. The area of the parish was over 7,000 acres and the population was around 2,000. The Great North Road running from London to Edinburgh ran through the village of Eaton Socon. The parish church was in Eaton Socon village (sometimes referred to as Eaton Town) and the hamlets included in the parish were Bushmead, Duloe, Eaton Ford, Honeydon, Staploe, Upper Staploe, Begwary, Wyboston and several outlying farms.

In the last forty years the county boundaries have also changed. In 1965 the villages of Eaton Socon and Eaton Ford joined with St Neots, across the river. The villages were now part of Huntingdonshire. When Huntingdonshire was merged with Cambridgeshire the residents could truly say that in a space of a few years they had lived in three counties while still living in the same house! Meanwhile the old ecclesiastical parish remains (with the exception of Wyboston which moved out of Eaton Socon parish in 1999) and those residents in the hamlets and farms to the west of the A1 still remain in Bedfordshire.

Although now part of St Neots for administrative purposes, the Eatons area has not lost its identity. There is an active Community Association which holds regular events and distributes newsletters to everyone in the Eatons. One of its aims is to record local history and information that might otherwise be lost. The Association is always keen to find out about past and present people who have lived in the villages, and have written several booklets about life in the past.